What is better for e-commerce stores, native mobile apps or web apps?

It’s great that you ask yourself this question, in today’s world full of possibilities, a question that can be discussed.

What are the fundamental differences and similarities between progressive web apps and native apps?
Here a small but informative confrontation:

Native apps are developed and deployed exclusively for a specific operating system – Android or iOS. The well-known App Stores serve as a sales platform for these apps. Users use these to access the apps and download them to their smartphones. Creating, maintaining and developing native apps is very costly and time consuming.
A major advantage of native apps, however, is the access to hardware (camera) of the smartphone, as well as the storage of data on the device’s own memory. Native apps can be placed on the device screen. However, regular updates must be carried out via the respective App Store.

Unlike native apps, Progressive Web Apps are not downloaded from an App Store. They can be found as mobile websites on the World Wide Web. They also combine the advantages of responsive websites (adaptation to the respective end device) and the other advantages of native apps. Progressive Web Apps can be accessed via the Internet browser and the user experiences the typical handling of a native app. They can also be used in offline mode, since their contents are stored in the cache of the device and thus all important elements are also loaded offline. So far, however, only Android supports all app functions, e.g. sending push messages to android.
Of course, progressive web apps can also be added to the home screen of the end devices.
As a mobile website the PWA Google indexing is possible, through Service Workers the app is always up to date. The PWA also benefits from fast loading time and uncomplicated storage on the home screen. The mobile app can be easily shared by a messenger with friends and is very secure thanks to SSL encryption.

Now that we’ve discussed the benefits of the Progressive Web App, we can look at how a PWA performs as an online shop.

Lancóme benefited from the migration from a native ios app to a pwa with a 17% higher conversion rate. The number of mobile sessions increased by 53%.
Trivago was able to increase the click rate on hotel bookings by 97%. Alibaba’s Progressive Web App registered 14% more users under iOS and increased iOS conversion by 76%. Android even records more than twice as many users.

For small and medium-sized businesses it makes sense to use a progressive web app for the online shop. In order to be able to convert the received traffic in the best possible way and not to be dependent on the download from the app store. Customers benefit from a better user experience through very fast loading, low storage space and best features. The PWA can also be added to the home screen of smartphones to stay in customers’ memories and be more accessible again.
The best features from the native app and the progressive web app are combined to implement the shop in the best possible way and to get the best possible conversion rate.

We're not around right now. But you can send us an email and we'll get back to you, asap.

Internal linking in your mobile appBlog 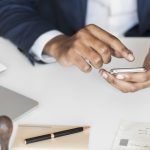 Integration of external websites via iFrames with pwa-builder.ioBlog